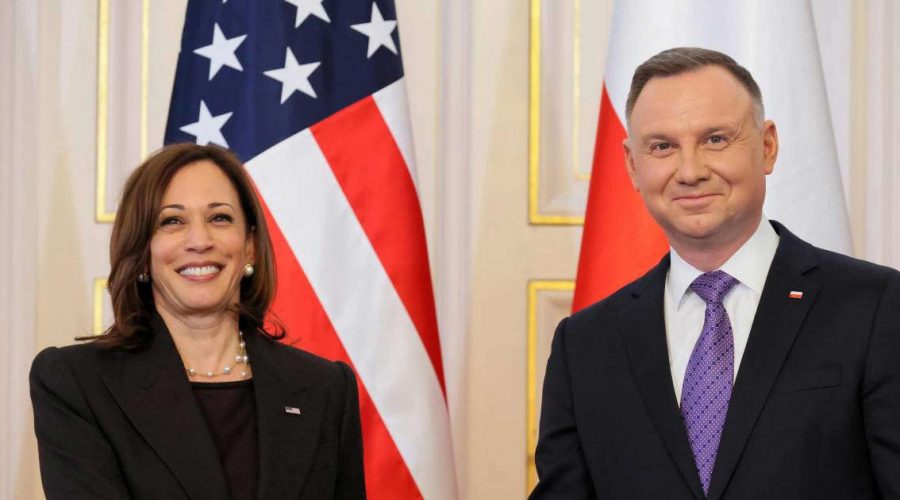 Vice President Harris lands in Warsaw on 9th of March. She landed a day after US officials declared they were blindsided by Poland’s decision to supply jets to Ukraine. Russia’s war on Ukraine has become the top foreign crisis for the Biden White House. And as Vice President Harris met with U.S. allies on NATO’s eastern flank, she thanked the Polish people for taking in Ukrainian neighbours.

President Andrzej Duda of Poland and  Ms. Harris held a joint news conference in the capital Warsaw, where the President said his country needed more direct assistance from the United States to support Ukrainians fleeing the war.

They both spoke after a meeting in which Ms. Harris sought to fortify the strong U.S. partnership with Poland. Just a day before, American officials said they were blindsided by a Polish offer to provide jet fighters to Ukraine, which Washington rejected out of fear that such a move could escalate the conflict.

“When it comes to crimes and violations of international norms and rules, we are also very clear that any intentional attack on innocent civilians is a violation,” Ms. Harris said when asked if there should be an international investigation into Russian war crimes. “Absolutely there should be an investigation and we should all be watching.”As the highest-ranking U.S. official dispatched to Eastern Europe since Russia attacked Ukraine, Ms. Harris’ visit to a country on the front lines of the war’s fallout further solidified her rise from a relative novice on the global stage to a top diplomat dealing with an international crisis, CNN noted.

Ms. Harris arrived in Poland a day after Poland’s surprising offer on Wednesday to hand over Russian-made MIG fighters to the United States so they could ultimately be transferred to Ukraine. But the Biden administration turned it down, trying to avoid anything that could be viewed by Moscow as escalation of U.S. or NATO military involvement in the war.

Kamala Harris is certainly no stranger to making blunders at totally inappropriate times. It happened on Thursday, during a joint press conference The Polish President Andrzej Duda Warsaw, in Poland: the Vice President of the United States could not hold back laughter when asked by a reporter whether America will welcome Ukrainian refugees. Harris looked at Polish President Andrzej Duda, perhaps believing he would answer first, before bursting out laughing. “Is the United States willing to make a specific allocation for Ukrainian refugees?” she asked a reporter to Harris, and then turned to the Polish president: “And for President Duda, I wanted to know if he thinks so and if he has asked the United States to accept the refugees.”

The video that immortalises the gaffe has been greeted by a series of criticisms on social networks, starting with Fox News anchor Sean Hannity, and former Donald Trump campaign collaborator George Papadopoulos. “She is laughing awkwardly. Again. Arguing about refugees is not a laughing matter.” Turning Point USA creative director Benny Johnson observed: “Only you would find it appropriate to laugh when it comes to the issue of Ukrainian refugees.” This is not the first time that Harris has taken heat for her apparent lack of sensitivity.

Harris followed her Polish visit with a visit to Romania, this being her introduction to the global stage of diplomacy since her election to the role of Vice-President last year.