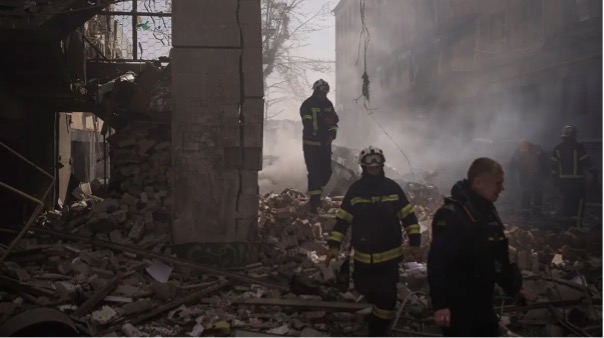 Ukrainian fighters forced to surrender at Mariupol. Hundreds of die-hard Ukrainian soldiers who had made a last stand against Russian forces from a Mariupol steel mill faced an uncertain future Tuesday under Kremlin custody after Ukraine’s military ordered them to surrender.

More than 200 fighters were evacuated overnight, some of them heavily wounded, and transported to Russian-controlled territory. An unknown number of fighters still remain inside the plant.

“The only thing that can be said is that the Ukrainian state is doing everything possible and impossible” to save the soldiers, Ukraine’s deputy defense minister, Hanna Malyar, said at a news conference Tuesday afternoon. But Russian officials said nothing about an exchange — on the contrary; they raised the prospect that at least some of the prisoners would be treated as war criminals.

Russia’s Investigative Committee, the country’s equivalent to the F.B.I., said Tuesday that investigators would interrogate the captured fighters to “check their involvement in crimes committed against civilians.”

And the prosecutor general’s office asked Russia’s Supreme Court to declare the military unit to which most of the captured fighters belong, the Azov battalion, a terrorist organization. Russian news media have seized on the Azov battalion’s connections to far-right movements to provide a veneer of credibility to the Kremlin’s false claims that Russia’s forces were fighting Nazis in Ukraine.

The Russian threats against the prisoners raised questions about the viability of the terms Ukraine had negotiated with Moscow to surrender, and whether the hundreds of troops still remaining inside the steel plant would abide by the deal.

For Ukraine, the fighters are a symbol of resistance. Outmanned and outgunned, they held out longer than anyone thought possible, forcing Russia to divert troops from its attempt to conquer other parts of the country.

In a message posted to Facebook on Monday night, Ukraine’s General Staff called the troops “heroes of our time” and said their efforts had helped Kyiv organise the defence of its southern flank.

In his video address after midnight local time on Tuesday, Ukrainian President Volodymyr Zelensky said that Ukrainian military, intelligence and negotiating teams, as well as the Red Cross and the UN were involved in the evacuation operation.

However, he cautioned that the Ukrainian troops may not be freed immediately and warned that negotiations over their release will require “delicacy and time”.

Hundreds of Ukrainian soldiers – Marines, the National Guard – including the Azov regiment – border guards, police and territorial defence units – as well as a number of civilians with young children have been holed up at the site since advancing Russian troops encircled the southern city in early March.

The sprawling four-square mile complex is a maze of tunnels designed to survive a nuclear war.