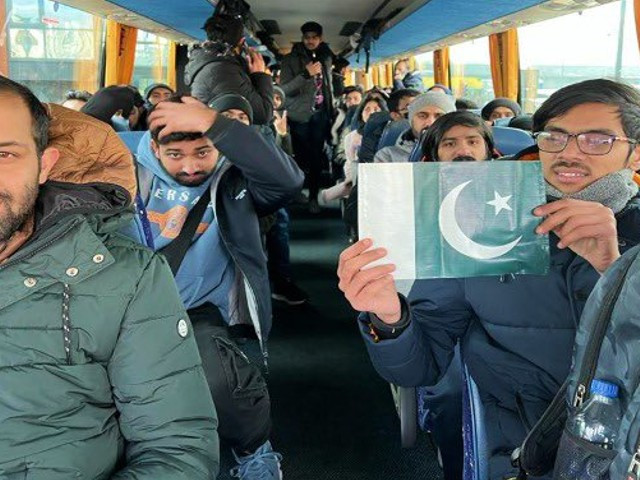 The Ukraine crisis could encourage Pakistanis migrants to the EU fleeing war-torn Ukraine. Taking advantage of porous borders with bordering countries illegal migrants are surreptitiously planning to seek asylum or arrive as illegal immigrants in European countries like Germany.

Ukraine’s immediate neighbours like Poland, Hungary, Slovakia, Moldova and Romania are already preparing for a massive deluge of refugees from Ukraine. What worries them, and other European countries like the United Kingdom, France and Germany, is the influx of `undesirable` elements from countries like Pakistan.

Credible reports filtering from the war-zone talk of Pakistani students being evacuated from Ukraine to be temporarily stationed in Romania. About 130 students have so far reached Romania, of which 70 have returned to Pakistan. The remaining were to be flown back home by March 10. What has alerted the countries around Ukraine is the disappearance of three of them from the hotel in Romania. They were found to have reached Germany via land route.

This incident has rung warning bells across Europe where Pakistani immigrants have taken part in crime and militant-related activities. The Pakistani migrants’ involvement in the London 2005 bombing is a glaring example. Their involvement in moving money, men and material for al Qaeda and other allied terrorist groups have been extensively documented.

Pakistan’s official estimates put the total number of citizens attempting illegal passage to Europe via Iran and Turkey number close to 40,000. Many of them find shelter and protection from religious group like Tablighi Jammat which runs several thousand mosques across Europe.

In the past several years, there have been frequent reports of deportation of Pakistani nationals for living without valid documents, participating in street gang fights and hooliganism. According to Pakistani official sources, close to 283 Pakistani nationals were being deported from over 100 countries since 2015. The total number of such nationals number 618,877 from 138 countries. Most of these deportations surprisingly take place in friendly Muslim countries like Saudi Arabia, Oman, UAE, Qatar, Bahrain, Iran and Turkey.

For example, Turkey has sent back 32,300 Pakistanis in the last six years. In 2017,Saudi Arabia deported to over 40000 Pakistani workers for suspected involvement in terror related charges. In fact, the Saudi government has increased scrutiny of workers coming from Pakistan.

The numbers are no less in European or western nations. From the US, more than 1,700 Pakistanis have been deported since 2015. From Greece, as many as 6,230 Pakistanis were deported. Germany has been regularly deporting failed asylum seekers, convicts and other illegal migrants from Pakistan. In UK, Pakistani settlers have earned a notorious name for being involvement in acts of terrorism and killings.

Paid assassins for the ISI

The latest one is the ongoing trial of a Pakistani national, Muhammad Gohir Khan, for acting as a paid assassin for Pakistan intelligence agencies. His job was to kill a blogger Ahmad Waqqas Goraya who had irked the Pakistan Army Generals with his strident criticism of their actions. France sent back 756 Pakistani nationals during this period. In October 2020, France MEP Dominique Bilde during a session called Pakistan a serious security threats for sale of European Union passports and visas to criminals. Her comments came in the wake of the Paris attack in September where two persons were killed outside Charlie Hebdo’s former offices. The attacker was a citizen of Pakistan who entered France illegally and acquired citizenship-by-falsifying his documents.

Equally ominous is the evidence collected by different intelligence agencies of the ISI’s involvement with crime syndicates operating in several countries, including France and Thailand. A DW report, The business with terror, was damning in the condemnation of the ISI, which used funding from western counterparts to finance crime and terror in Europe. The ISI has been using syndicates to run fly-by-night operations to supply fake travel documents to Pakistanis travelling towards Europe and the US. The Ukraine crisis has stoked similar fears among European countries of Pakistan using it has a window to push in more Pakistanis into European countries already reeling under massive migration crisis. The Pakistan factor has only added to their growing concerns.