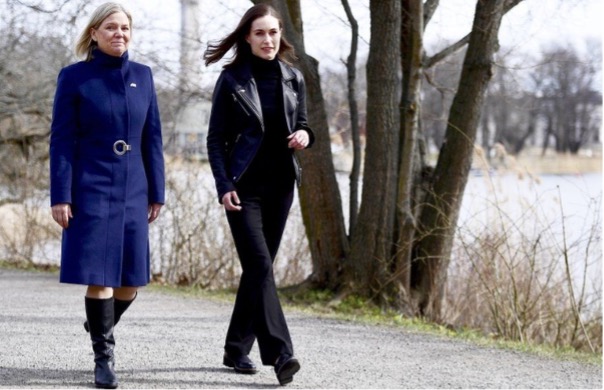 Sweden and Finland to seek NATO Membership as Finland has made its first move towards joining Nato, and Sweden could follow within days – a monumental shift for two nations with a long history of wartime neutrality and staying out of military alliances.

Russia strongly opposes the two states joining and uses the expansion of the West’s defensive military alliance as a pretext for its war in Ukraine.

If they do, it will end over 200 years of Swedish non-alignment. Finland adopted neutrality following a bitter defeat by the Soviet Union during World War Two.

Finnish public support for joining Nato was for years at around 20-25%. But since Russia’s invasion of Ukraine, it has shot up to a record high of 76%, according to the latest opinion poll. In Sweden, 57% of the population want to join, again far higher than before the war.

On Thursday, Finnish President Sauli Niinisto urged his country to apply for Nato membership “without delay”, with the wider government expected to formally announce its decision on Sunday.

Sweden’s ruling party, too, is expected to deliver a verdict at the weekend.

If it is a yes, both parliaments will have clear majorities in favour of membership, and the application process can begin.

This deal will bring change in some ways, not much. Sweden and Finland became official partners of Nato in 1994 and have since become major contributors to the alliance. They have taken part in several Nato missions since the end of the Cold War.

A major change would be the application of Nato’s “Article 5”, which views an attack on one member state as an attack on all. For the first time, Finland and Sweden would have security guarantees from nuclear states.

Although the debate has shifted in favour of membership very quickly in both countries, historian Henrik Meinander argues Finland was mentally prepared for it. Small steps towards Nato have progressively been taken since the fall of the Soviet Union, he says.

Sweden took a different path in the 1990s, reducing the size of its military and changing priorities from territorial defence to peacekeeping missions around the world. But that all changed in 2014, when Russia annexed Crimea from Ukraine. Conscription returned and defence spending was boosted. In 2018, every household received army pamphlets titled “if crisis or war comes” – the first time they were sent out since 1991.

Finland has already reached Nato’s agreed defence spending target of 2% of GDP, and Sweden has drawn up plans to do so.

President Putin has frequently used the prospect of Nato expanding to Ukraine to justify his invasion. So Sweden and Finland joining the alliance would be perceived as a provocation.

Russia’s foreign ministry says both countries have been warned of the “consequences” of such a move. Dmitry Medvedev, a close ally of the Russian leader, has warned that Nato accession may prompt Moscow to deploy nuclear weapons in Kaliningrad, the Russian exclave between Poland and Lithuania.

While not dismissing these threats, Alexander Stubb suggests a more realistic risk is of Russian cyber attacks, disinformation campaigns and occasional airspace violations.

The final decision will be announced by the two prime ministers: Magdalena Andersson of Sweden and Finland’s Sanna Marin