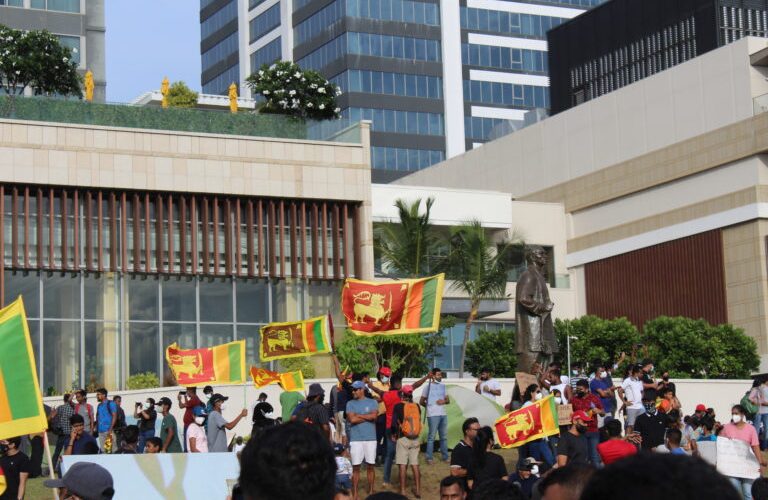 COLOMBO: 18th April 2022: Demonstrators in Sri Lanka lit up the President’s Secretariat building with ‘Go Home Gota’ slogans as the Galle Face protest entered its seventh day. Protesters have occupied the entrance and surroundings of President Gotabaya Rajapaksa’s office, holding him responsible for the nation’s crippling economic crisis. They are also calling for his influential family to resign, accusing them of corruption and misrule.

On Sunday, protestors flashed anti-government slogans on the Presidential Secretariat building, with security officials attempting to block the projection. The slogans, some in English, read ‘Go Home Gota’ and ‘No more corruption.’

Anger against Sri Lankan President Gotabaya Rajapaksa’s handling of a deepening economic crisis in the island nation of 22 million people spiralled into violence late on Thursday, as hundreds of protesters clashed with police for several hours. A severe shortage of foreign currency has left Rajapaksa’s government unable to pay for essential imports, including fuel, leading to debilitating power cuts lasting up to 13 hours. Ordinary Sri Lankans are also dealing with shortages and soaring inflation, after the country steeply devalued its currency last month ahead of talks with the International Monetary Fund (IMF) for a loan programme.

President Gotabaya Rajapaksa on Monday appointed a new Cabinet, even as seaside protests demanding his resignation continue for over 10 days.

Real reasons for the crisis

Post-independence from the British in 1948, Sri Lanka’s agriculture was dominated by export-oriented crops such as tea, coffee, rubber and spices. A large share of its gross domestic product came from the foreign exchange earned from exporting these crops. That money was used to import essential food items.

Over the years, the country also began exporting garments, and earning foreign exchange from tourism and remittances (money sent into Sri Lanka from abroad, perhaps by family members). Any decline in exports would come as an economic shock, and put foreign exchange reserves under strain.

For this reason, Sri Lanka frequently encountered balance of payments crises. From 1965 onwards, it obtained 16 loans from the International Monetary Fund (IMF). Each of these loans came with conditions including that once Sri Lanka received the loan they had to reduce their budget deficit, maintain a tight monetary policy, cut government subsidies for food for the people of Sri Lanka, and depreciate the currency (so exports would become more viable).

But usually in periods of economic downturns, good fiscal policy dictates governments should spend more to inject stimulus into the economy. This becomes impossible with the IMF conditions. Despite this situation, the IMF loans kept coming, and a beleaguered economy soaked up more and more debt.

The last IMF loan to Sri Lanka was in 2016. The country received US$1.5 billion for three years from 2016 to 2019. The conditions were familiar, and the economy’s health nosedived over this period. Growth, investments, savings and revenues fell, while the debt burden rose.

A bad situation turned worse with two economic shocks in 2019. First, there was a series of bomb blasts in churches and luxury hotels in Colombo in April 2019. The blasts led to a steep decline in tourist arrivals – with some reports stating up to an 80% drop – and drained foreign exchange reserves. Second, the new government under President Gotabaya Rajapaksa irrationally cut taxes.

Value-added tax rates (akin to some nations’ goods and services taxes) were cut from 15% to 8%. Other indirect taxes such as the nation building tax, the pay-as-you-earn tax and economic service charges were abolished. Corporate tax rates were reduced from 28% to 24%. About 2% of the gross domestic product was lost in revenues because of these tax cuts.

In March 2020, the COVID-19 pandemic struck. In April 2021, the Rajapaksa government made another fatal mistake. To prevent the drain of foreign exchange reserves, all fertiliser imports were completely banned. Sri Lanka was declared a 100% organic farming nation on the advice of Vandana Shiva, an Indian environmentalist largely ignored in India however a guru to western organic farming advocates.. This policy, which was withdrawn in November 2021, led to a drastic fall in agricultural production and more imports became necessary.

But foreign exchange reserves remained under strain. A fall in the productivity of tea and rubber due to the ban on fertiliser also led to lower export incomes.

he developments come as Sri Lanka’s economic crisis intensifies, with citizens struggling to get essentials, including food items, cooking gas, and fuel. Sunday night, Indian Oil Corporation subsidiary Lanka IOC, which accounts for a third of the local market, announced yet another steep hike in fuel costs. It increased the price of petrol 35 Sri Lankan rupees a litre, and diesel by 75 Sri Lankan rupees, as the local currency continues to depreciate, and global oil prices soar. The current prices of Petrol are LKR 338 (roughly ₹ 79) per litre in case of 92 Octane, and LKR 367 (₹ 86) per litre for the 95 Octane variety.

Last week, Colombo announced its decision to default on its $ 50 billion foreign debt, and this week, a delegation led by Finance Minister Ali Sabry will hold talks with the International Monetary Fund in Washington DC. The Parliament is scheduled to convene on Tuesday. The Opposition has indicated that it may table a No Confidence Motion against the government.

What next in Sri Lanka?

A total of 17 members, including many former Cabinet ministers, were sworn in, authorities said. The “new Cabinet” did not include two Rajapaksa brothers — Chamal and Basil Rajapaksa — and Namal Rajapaksa, their nephew, who earlier held key portfolios. They resigned with their Cabinet colleagues on April 3, amid surging public anger against the ruling clan. Twenty-four new State Ministers were also sworn in.

Despite massive demonstrations demanding their resignation, President Gotabaya Rajapaksa and Prime Minister Mahinda Rajapaksa remain in power. Both brothers were responsible for enthusiastically pursuing China’s Belt and Road Initiative funded projects which have also been stated as another reason for today’s economic crisis. Corruption, which often these Chinese projects ignores, has enriched the Rajapaksha’s at the cost of the nation’s treasury.

For the first time admitting to “mistakes” made by his administration, Mr. Gotabaya said: “I believe that we should have gone for a programme with the International Monetary Fund earlier. Also, I think the decision not to provide chemical fertilizers to farmers was an error. We have taken steps to revive that practice,” according to a statement issued by his office on Monday.

It seems that the Rajapaksha’s are on their way out. There does not seem to be any way they can credibly continue to rule at the moment as well as have additional international funding. Most old school Sri Lanka observers are currently discussing names for replacements for the current leadership and former Prime Minister Ranil Wickramasinghe is at the top of the list. While India extends additional credit lines to reduce the island nations dependance on China, lucrative textile manufacturing is fleeing the island to India due to the economic uncertainties. While India and China are both trying to shore up their regional neighbour, the European Union and the United States need to divert their attention from Ukraine to assist efforts in preventing Sri Lanka into spiralling into a IMF led debt trap. This may be very well the perfect opportunity to wean Sri Lanka away from China’s influence and create a new strong ally for a free and open Indo-Pacific. The Rajapaksha brothers, once adored by the Sinhala buddhist majority for having crushed the Tamil resistance movement LTTE, are credited with bringing Sri Lanka closer to China. Now may be the time, when their political fortunes are at the weakest, to reverse that initial error.