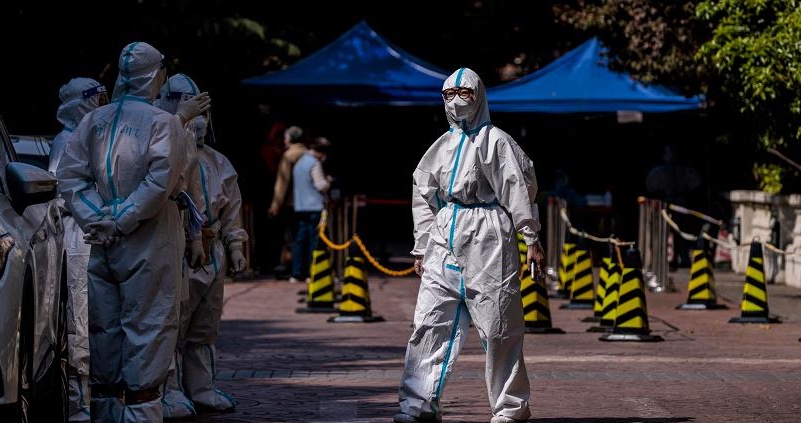 Shanghai is under lockdown again as China is hell bent to implement unpopular zero-Covid strategy on the orders of President Xi Jinping.

Indications to this effect came from Chinese state media which has been working overtime to defend Beijing’s zero-Covid strategy. The strategy has become a part of Xi Jinping’s political legacy – using the president’s “persistence is victory” phrase to encourage people to stay the course.

President Xi Jinping who is seeking a mandate for a third term, wants peace and stability during the run up to the event. He is expected to be granted an unprecedented third five-year term as party leader at the congress slated at the end of this year. Authorities are leaving no stone unturned to promote stability in the run-up to the event.

China’s hard line zero Covid strategy has caused a lot of hardship to people of Shanghai, one of the wealthiest and most globalised cities, as some residents revolted against lockdown orders which have stretched in some instances to a month. Tech giant Tencent Holdings Ltd. took down two videos last week of a rare protest at a Shanghai housing compound after they started trending on the company’s WeChat microblogging and video publishing platforms, stated a person familiar with the matter. The videos had been posted by users to their WeChat timelines, the person said.

The Chinese leadership which is obsessed with covid zero measures, hadordered for removal of these videos for political reasons.Tencent had reportedly told staffers the videos were taken down because they violated China’s laws and policies. A third video of the compound’s residents demonstrating, where the chanting is less clear, and doesn’t include terms like “freedom,” has been allowed to remain online.

The ramped-up censorship reflected China’s growing dilemma over its zero-tolerance approach to the virus, which is extracting greater economic and social costs while leaving it isolated in a world that’s chosen to live with Covid. Such protests against the measures have proved beyond doubt that these measures are unrealistic and un-sustainable. These incidents have brought back focus on China’s covid zero measures and their far-reaching consequences over the country’s economy.

According to global financial services firm Macquarie Group, lockdown is a costly affair with consumer businesses and the property sector set to be hit the most. The Covid poses substantial growth downside risk in the rest of this year, as lockdown is also very costly. The report further stated that the Shanghai lockdown indicated that China would stick with the hard-line strategy at least up until the ruling Communist Party holds its once-every-five-year congress slated to be held later this year. According to RanaMitter, Professor of the History and Politics of Modern China at the University of Oxford, that is because the communist dictator has “far more pressing issues to worry about than war in far-off Ukraine”.Prof Mitter said: “While bombs rain down on Mariupol, Covid remains the main story in China. Much of the rest of the world has opened up, including India, but China and Japan remain major outliers.

Authorities’ obsession with eliminating the virus led them to split the mega-city Shanghai into two, the Huangpu River serving as the dividing point.The eastern half entered a lockdown on Monday, March 28, and was due to emerge from it on Friday, April 1 to give way to the western side’s turn.The lockdown of the western side went ahead as planned. However, the eastern side didn’t exit theirs after an extension was announced late on Thursday night.

The two phase lockdown of Shanghai’s 26million people tested the limits of China’s zero covid strategy which has shaken markets far beyond the country’s borders. Experts argued that the strategy was not sustainable at all and added that it was an attempt to distract from Russia’s invasion of Ukraine for Chinese President Xi Jinping, whose friendship with Russian President Vladimir Putin was described by the two leaders as one with “no limits”.Now, more than five weeks into Putin’s war in Ukraine, there has been nothing other than silence from Jinping on the matter.

The shutdown has added to anxiety in financial markets over Russia’s war on Ukraine, the Federal Reserve’s effort to cool surging inflation by raising interest rates and other economic challenges. Although market reactions didn’t reflect the “true reality of the situation,” but investors already felt a lot of uneasiness about China and the global economy, said Michael Every of Rabobank. Netherland based cooperative bank which has sizeable international banking operations focussing on international business and rural activities in general and on the Food and Agri sector in particular.

Despite calls for a more targeted approach and some tweaking of the system, conditions in Shanghai have shown the government’s continuing reliance on extreme measures, regardless of the social and economic costs. Another report from Macquarie Group stated that COVID does pose substantial growth downside risk in the rest of this year, as lockdown is also very costly. It further added that consumer businesses and the property sector were set to take the biggest hits.

The Shanghai lockdown clearly indicated China will stick with the hard-line strategy at least up until the ruling Communist Party holds its Congress slated to be held towards end of this year to choose Xi Jinping as an undisputed leader. It is not ready to accept that there are fault-lines in the strategy which will have far reaching economic implications for the country’s economy and global economy as well.