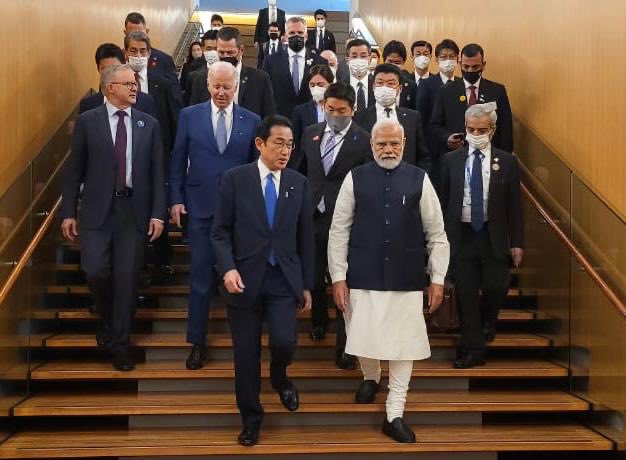 Quad leaders meet in Tokyo. This is the leaders’ second in-person meeting in less than a year.

U.S. President Joe Biden is meeting Tuesday with leaders from an informal alliance known as the Quad. Made up of the United States, Japan, India and Australia, the regional grouping is widely seen as an attempt to contain China.

They are expected to discuss a range of issues, including increasing economic cooperation in Asia as well as responding to Russia’s war in Ukraine.

White House national security adviser Jake Sullivan said international “food security” would be another topic up for discussion, with India’s decision a week ago to block exports of Indian-produced wheat on top of Russia’s blocking of Ukrainian exports of the grain.

Biden is in Japan as part of his first trip to Asia as president, after traveling to South Korea.

On Monday, Biden launched a new Asia-Pacific trade initiative, with 13 countries signing up, including India, Japan and South Korea.

The Biden administration says the launch of the Indo-Pacific Economic Framework is meant to demonstrate U.S. economic engagement in Asia, including greater cooperation on issues such as the supply chain, clean energy and worker protections.

In other developments Monday, Biden said the United States would be willing to intervene to defend Taiwan if China were to invade, the latest Biden comment casting doubt on the long-standing U.S. policy of “strategic ambiguity” on the matter.

Japan scrambled jets after Russian and Chinese warplanes neared its airspace during a visit by U.S. President Joe Biden on Tuesday, with Tokyo conveying “grave concerns” about what it saw as a provocative move timed to coincide with the Quad summit.

The issues of Taiwan and Russia loomed over the meeting in Tokyo of leaders of the Quad grouping of the United States, Japan, Australia and India, who stressed their determination to ensure a free and open Indo-Pacific region in the face of an increasingly assertive China.

Japanese Prime Minister Fumio Kishida said the group was not aimed at any one country.

As the leaders met, Russian and Chinese warplanes conducted a joint patrol that lasted 13 hours in the region, in what Japanese Defence Minister Nobuo Kishi characterised as a likely provocation by both Beijing and Moscow. Read a Reuters report on the aggression of the Chinese “dragon” and Russian “bear”.

In a joint statement, US President Joe Biden, Japanese Prime Minister Fumio Kishida, Indian Prime Minister Narendra Modi and Australia’s new leader Anthony Albanese said the Quad’s latest measures are aimed at demonstrating that the group “is a force for good” and that it is “committed to bringing tangible benefits to the region” at a time of profound global challenges.

And while the statement did not mention China by name, the leaders said they “strongly oppose any coercive, provocative or unilateral actions that seek to change the status quo” in the Indo-Pacific. These include “the militarization of disputed features, the dangerous use of coast guard vessels and maritime militia, and efforts to disrupt other countries’ offshore resource exploitation activities” – all accusations that have been levied against China.

To address some of these concerns, the Quad said it was announcing a new maritime surveillance initiative – the Indo-Pacific Partnership for Maritime Domain Awareness (IPMDA) – that it said will work with regional partners to respond to humanitarian and natural disasters and combat illegal fishing.

“IPMDA will support and work in consultation with Indo-Pacific nations and regional information fusion centers in the Indian Ocean, Southeast Asia, and the Pacific Islands by providing technology and training to support enhanced, shared maritime domain awareness to promote stability and prosperity in our seas and oceans,” the statement said.

The leaders also committed to deepening cooperation on infrastructure, saying such investment is “critical to driving productivity and prosperity in the Indo-Pacific region”. This includes addressing debt issues and extending more than $50bn in infrastructure assistance and investment in the Indo-Pacific over the next five years. They specifically pledged additional help for island nations in the Pacific, where China’s influence has grown in recent years.