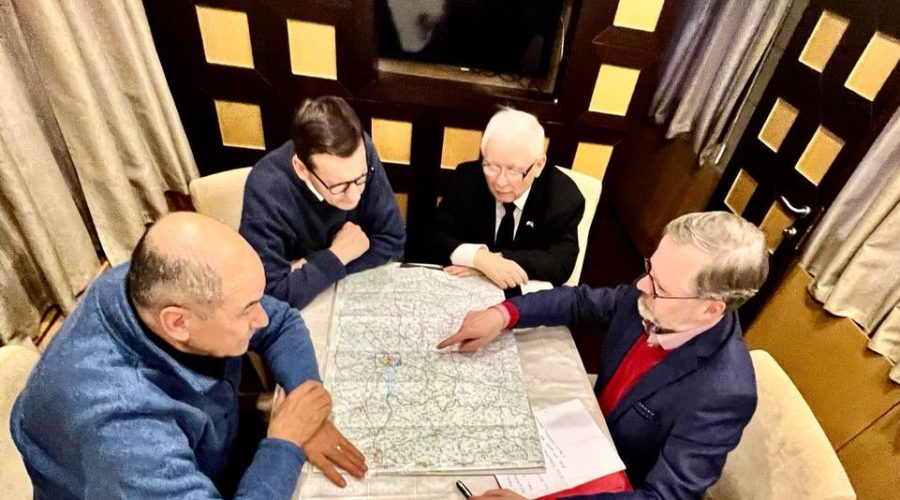 Czech Prime Minister Petr Fiala said in a tweet that the three leaders will meet with Ukrainian President Volodymyr Zelenskiy and Prime Minister Denis Shmyhal. They will also be accompanied by Jarosław Kaczyński, who is currently the chairman of Poland’s Committee for National Security and Defence.

According to Polsat News, the delegation went to Kyiv by train and arrived just after 8 am on Tuesday morning.

“The aim of the visit is to express the European Union’s unequivocal support for Ukraine and its freedom and independence,” Fiala said.

“At the same time, we will present a broad package of support for Ukraine and its citizens during the visit. The international community has also been informed of this visit by international organizations, including the United Nations.”

Overnight, Russian forces stepped up strikes on several suburbs of Kyiv as part of their unprovoked invasion of Ukraine.

The visit by Poland’s Mateusz Morawiecki, Czechia’s Petr Fiala and Slovania’s Janez Janša has been announced to international organisations, including the United Nations.

“Europe must guarantee Ukraine’s independence and ensure that it is ready to assist in reconstruction,” Morawiecki wrote on Facebook, announcing the trip.

“Today Georgia, tomorrow Ukraine, the day after tomorrow the Baltic states, and later maybe it’s time for my country, for Poland,” Morawiecki quoted former Polish President Lech Kaczyński, who said those words in the Georgian capital Tbilisi in 2008, when the country also faced aggression by Russia.

“His visit then changed the perception of this war, and a great act of courage added spirit to Georgians and is still remembered all over the world today.” the statement said. The visit is organised in consultation with the President of the European Council Charles Michel and the President of the European Commission Ursula von der Leyen. The purpose of the visit is to confirm the unequivocal support of the entire European Union for the sovereignty and independence of Ukraine. The aim of this visit is also to present a broad package of support for the Ukraine and Ukrainians.