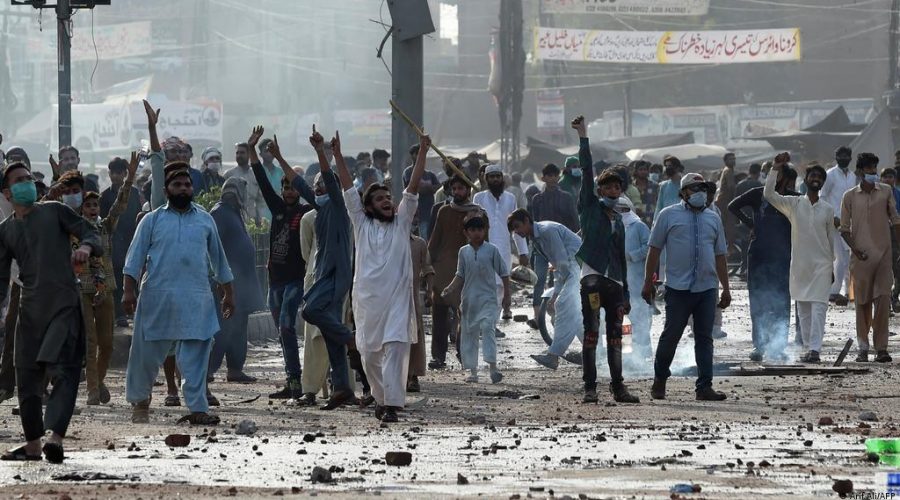 A violent mob in Pakistan’s Punjab province stoned to death a “mentally challenged”
man accused of committing blasphemy over allegedly desecrating the Holy Quran on
February 12.  This is not the first incident of the mob justice in Pakistan. In November
2021, a mob had vandalised a police station in Khyber Pakhtunkhwa’s Charsadda
district and set it on fire after the local authorities refused to hand over a man arrested
for allegedly desecrating the Holy Quran.  Moreover, the memories of lynching of a Sri
Lankan factory manager, Priyantha Kumara, in Punjab’s Sialkot city in December are
still fresh.

Such killings in Pakistan over blasphemy accusations are not just about extrajudicial
vigilantism.  They have an all-encompassing reasons ranging from religious and
political to petty and personal disputes, and international connections. According to the
U.S. Commission on International Religious Freedom Report (2016), Pakistan has the
world’s second-strictest blasphemy laws after Iran.  But what is more concerning is
that, in most blasphemy cases, culprits are either eulogised as the ‘saviour’ of Islam, in
case they get a judicial sentence, or are released under the pressure from religious
extremists.

These religious extremists support the severest implementation of draconian blasphemy
laws to subjugate the lower-strata of society, Ahmadiyyas and Shias, and other religious
minorities such as Christians, Hindus, and Sikhs. This is the legacy of the Islamic
military dictator General Ziaul Haq, who used the laws to appease the hard-line Islamist
forces in Pakistan.

However, the menace of blasphemy killings in Pakistan has currently reached an
unprecedented level under the Imran Khan government, which has provided space to
extremist Islamist outfits such as Tehreek-e-Labbaik Pakistan (TLP), a Sunni Barelvi
group. Prime Minister Khan has promised the citizens of Pakistan to turn the country
into an Islamic ‘welfare’ state or Riyasat-i-Medina. On the contrary, it is fast
transforming into a pariah state, where the hard-line Islamic groups belonging to
different Sunni sects – Deobandi, Barelvi, Ahl-e-Hadith – are calling for the imposition
of the Sharia law, undermining the official constitution.

Among several Sunni Islamist outfits, the TLP has championed the cause of the
blasphemy issue and employed it as its main talking point in Pakistan. The TLP is the
political wing of Tehreek-i-Labbaik Ya Rasool Allah, which was formed in 2016 by
Khadim Hussain Rizvi after the execution of Mumtaz Qadri, the bodyguard policeman of
Punjab governor Salman Taseer. The party supports mob lynching of those accused on
the blasphemy charges or questioning the ‘Finality of Prophethood’. It has conducted
several street protests since its inception, including last year’s violent anti-France
demonstrations.

Both mainstream political parties and the powerful military establishment in Pakistan
have used Islamist groups like the TLP to serve their purposes. But, sometimes that
strategy can bite them in the back as has happened in the case of the TLP, which has

become a nationwide phenomenon in Pakistan. The group’s exponential rise in the last
few years has contributed to increasing cases of blasphemy killings in the country.
Besides individual or more localised incidents, there is an emerging trend of the ‘mob
justice’ in Pakistan, which is getting out of the government’s control.

There are regular episodes of attacks on the minorities’ properties and their religious
places on fake or inadvertent blasphemy charges in Pakistan. In August last year, a
Muslim mob attacked a Hindu temple in Punjab’s Rahim Yar Khan district after an
eight-year-old Hindu boy, who was arrested for allegedly committing blasphemy, was
released on bail.  PM Khan has expectedly condemned the incident but the ruling PTI is
aware of the limitations, and possible ignorance, in touching the blasphemy issue,
especially when the victims are either Ahmaddiyas or other religious minorities like
Hindus since they are politically irrelevant as well in Pakistan.

In a recent study on the blasphemy issue in Pakistan, a local Think Tank, Centre for
Research and Security Studies had revealed that from 1947 to 2021, as many as 89
people were extra-judicially killed over blasphemy accusations in the country.  It
further stated that a total of 1,287 citizens were accused of committing blasphemy from
2011-21, the period in which TLP remained most active and expanded its support base
across the country.

Furthermore, the report cautions that, “the actual number [of blasphemy killings] is
believed to be higher because not all cases get reported in the press,” adding more than
70% of the accused were reported from Punjab. In total, 1,098 cases were reported from
Punjab followed by 177 from Sindh, 33 from Khyber Pakhtunkhwa, 12 from Balochistan
and 11 from Pakistan Occupied Jammu and Kashmir (PoJK). These numbers present a
very grim picture of the modern day Pakistan, especially the heartland Punjab, in which
the ‘mob justice’ has become normalised and the formal judicial process has gone for the
toss. Punjab is also the home of several terror groups such as Lashkar-e-Tayyaba and
Jaish-e-Muhammad, and majority of the TLP supporters come from the province.

Blasphemy is a deeply emotive issue in Pakistan’s staunchly religious society. No civilian
government, or a political party, can take the risk of going beyond a certain point in
criticising the blasphemy killings in Pakistan. Moreover, it can have political
implications for the mainstream parties in some regions of the country, where
hardliners hold the votes. Blasphemy is also an effective weapon to intimidate members
of other religious minorities in Pakistan. In majority of the cases, culprits/mob justify
the killings by arguing that those who committed blasphemy are ‘wajibul qatal’ or
“worthy of being killed” under the Islamic Sharia law.

The Khan government’s failure to control incidents of blasphemy and an apparent soft-
corner for the extremist Islamist groups, for political purposes, will have far-wider
consequences for Pakistan in the coming months. In addition, the Taliban’s victory in
Afghanistan has emboldened the hard-line Islamist forces in Pakistan. All these factors
are indicating that there will be more incidents of blasphemy killings, targeted at mostly
non-Muslim minorities and Ahmaddiya community in Pakistan.