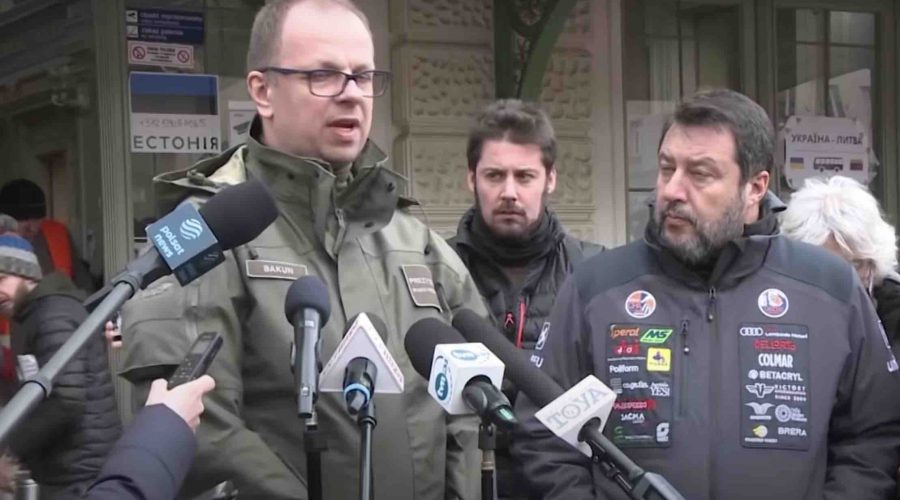 Matteo Salvini, leader of the Italian far-right Lega Nord party, took flak after arriving on Tuesday at the train station of the Polish city of Przemysl, some 10km from the Ukrainian border.  Salvini, who in the past expressed admiration for Russian President Vladimir Putin but has condemned the invasion of Ukraine, travelled to the area in an apparent effort to help bring about peace.

He was give a hostile and sarcastic reception on Tuesday, with Mayor Wojciech Bakun publicly refusing to receive him and displaying a T-shirt with Russian President Vladimir Putin’s face on it and the words: “Army of Russia”. A T-shirt Salvini has worn in the past while he has expressed his admiration for Putin.

“Come with me to the border and condemn him,” the mayor demanded of Salvini who embarrasedly tried to explain he was there to save refugees and for “peace”. A group of Italian photographers also heckled Salvini, calling him a “buffoon”. Salvini said he was not interested in fights with the Italian left or the Polish ones. “We are here to help those escaping from war,” he added.

akun said he wanted to personally escort Salvini wearing the T-shirt to a refugee center “to see what your friend Putin has done.”

Salvini interrupted Bakun as he spoke, saying: “We are helping refugees, children, moms, dads, from Ukraine.” He then walked away.

Salvini has praised Putin in the past as “one of the best statesmen.” He has denied taking money from the Kremlin.

When asked if he condemned Putin, he replied: “certainly, obviously. We condemn the war”.