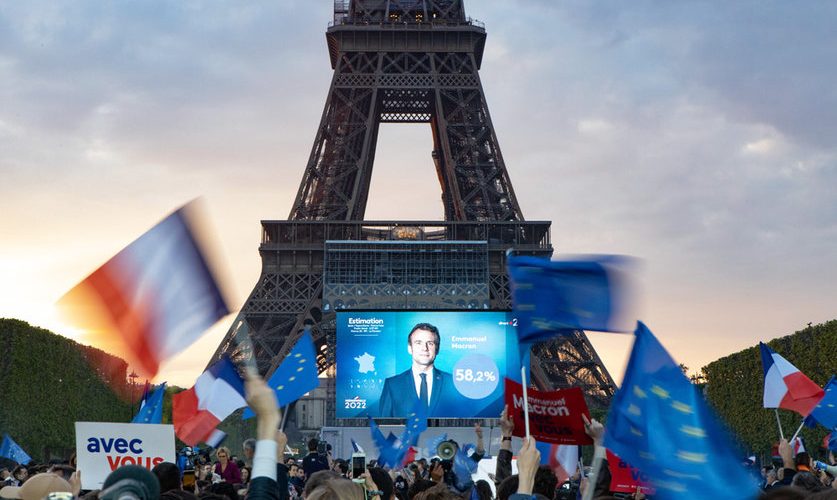 Macron Calls for a “European Political Community” that Would Also Include Non-EU Countries, French President Emmanuel Macron used a speech on Europe Day to put forward a sweeping, avant-garde but detail-light proposal to redraw the political map of the Continent with a new organization that would give Ukraine a closer relationship with the EU short of membership —and could even include the U.K.

Speaking Monday at the European Parliament in Strasbourg, Macron proposed a new “European political community,”  which would include both members and non-members of the EU.

The event served as both a celebration of Europe Day — which marks the anniversary of the Schuman Declaration that paved the way for today’s EU — and a closing ceremony for the Conference on the Future of Europe, a yearlong EU self-assessment process that included a series of town hall meetings with citizens.

The French leader appeared to be animated by a desire to find a solution for war-torn Ukraine, which has pleaded desperately for fast-track membership of the EU in the months since Russia’s brutal invasion.

Macron said the “legitimate aspiration” of the people of Ukraine, “like those of Moldova and Georgia, to join the European Union,invites us to rethink our geography and the organization of our continent.

“Ukraine, through its combat and its courage, is already today a member of the heart of our Europe, of our family, of our Union,” he declared.

But even as Macron expressed an outpouring of emotion for Ukraine, which is hoping to be officially granted EU candidate status at a European Council summit in June, the French leader simultaneously appeared to dash Kyiv’s highest hopes.

“Even if tomorrow we granted them the status of candidate for membership of our European Union … we all know perfectly well that the process allowing them to join would take several years — in truth, probably several decades.

And it is the truth to say this, unless we decide to lower the standards of this membership and therefore to completely rethink the unity of our Europe.”

However, in proposing new tiers of political affiliation with the EU, Macron was calling into question some of the most treasured, cherished and unshakeable pillars of the Union, including a balance of rights and responsibilities that entails fealty to EU law and payments into a common budget.And the organization that Macron described sounded a lot like the EU — yet would be open to countries such as the U.K. that had quit the bloc.

“This new European organization would allow democratic European nations adhering to our set of values to find a new space for political cooperation, security, cooperation in energy, transport, investment, infrastructure, and the movement of people, especially our youth,” Macron said.“Joining it would not prejudge future membership in the European Union, necessarily, just as it would not be closed to those who have left.”

Only the U.K. — which went through a recent and bitter separation from the EU — and Greenland fit the description of “those who have left.”And it was precisely Britain’s demands to enjoy privileges of membership while skirting obligations — which Brussels derided as “cherrypicking” — that led to such a vicious divorce.

Macron did not explain how any of the privileges of membership would be balanced against obligations. Nor did he have any specifics on how core EU members would provide security for newer affiliates that might be vulnerable to attack, let alone for Ukraine, which is already at war.Macron said he would be working with the governments of all states interested in the project in order to complete it, showing his belief that the same would be “the stability and the future” of the continent of Europe.

During this ceremony, a report with 49 proposals with concrete objectives and over 320 measures for the EU institutions to follow up on was submitted to the heads of the EU institutions, the Commission, the Council and the Parliament.