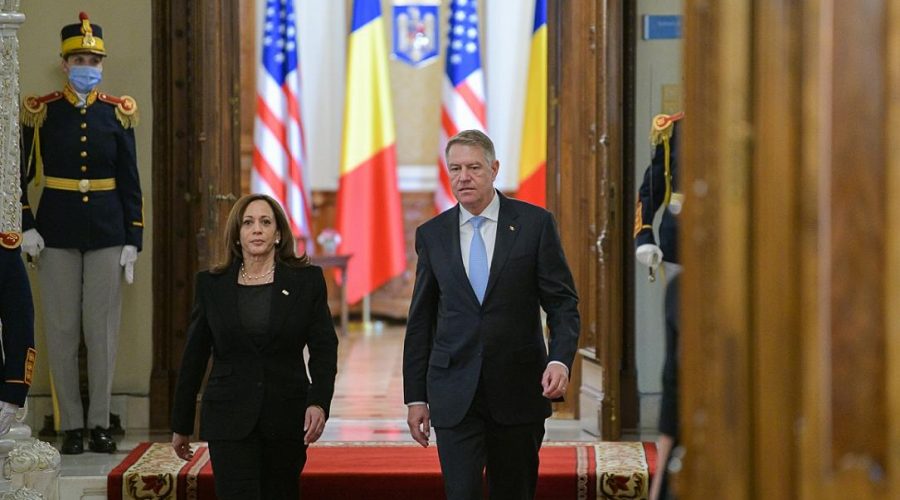 Kamala Harris landed in Bucharest on the 11th of March, as a part of her tour of Eastern Europe to reinforce relations with NATO allies Poland and Romania. The US Vice President and President Iohannis of Romania met at about 2.15pm local time in the Hall of Honour of the Cotroceni Palace before beginning a bilateral meeting in the Honour Room.

The United States’ commitment to NATO’s Article 5, according to which an attack against one ally is considered as an attack against all, is “ironclad,” U.S. vice president Kamala Harris said. (remarks of Vice President Harris and President Iohannis)

“America’s commitment to Article 5 is ironclad. We take very seriously our role and the relationships that we have within the NATO Alliance. We take seriously and are prepared to act on the words we speak when we say an attack against one is an attack against all,” she said at a press conference with president Klaus Iohannis.

She mentioned the 1,000-member Stryker squadron recently deployed to Romania, as well as the United States Congress’ USD 13.6 billion package for Ukraine.

“I cannot repeat frequently enough that the United States is committed to our friendship and alliance with Romania. And to that end, we have a continuous and rotating commitment of U.S. troops to this country, most recently with the deployment of the 1,000-member Stryker squadron. And as the people of Romania know, we also know that this is a dynamic situation, and we will, on a daily basis, assess the needs that we have to maintain stability in this region. As it relates to what might be the future conduct of Putin, I cannot speculate. But we are clear in our position, which is that as a member of NATO, an attack against one is an attack against all,” she said.

In his turn, president Iohannis said there is no information indicating Romania would be a target for an aggression. “We do not have information that would indicate that Romania would represent a target of an aggression. On the other hand, it is very clear that this Russian action, this war started against Ukraine, definitely created, definitely produced a result – a visible, a firm, a clear result. And it’s represented by the unity of NATO and the determination of NATO Allies to stand together and to defend themselves- each other.”

Iohannis also spoke of the “unshakeable security guarantees” that Romania currently enjoys and said Romanians could be confident about their safety.

“I have conveyed my gratitude for these unshakeable security guarantees as the Romanian society has never had in its history, and thanks to which every citizen of Romania can be confident about his own safety and the safety of his family,” he said.