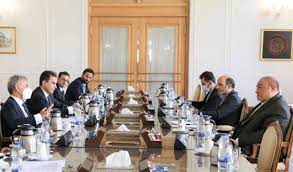 Director General of the Italian Foreign Ministry Ettore Francesco Sequi has met with Iranian Deputy Foreign Minister for Economic Diplomacy Mehdi Safari during his visit to Tehran, cites a press release of the Iranian Ministry of Foreign Affairs.

In the meeting, Safari referred to the cooperation possibilities of Iran and Italy including in the economic sector and underlined the need for maximum use of the capacities of both countries.

The Iranian deputy foreign minister Safari also reviewed the areas of cooperation and reiterated that Italian companies have had a good position with Iranian businesspeople and that Italy should seize this opportunity.

The director general of Italy’s foreign ministry for his part said during the meeting that he was pleased to visit Tehran, where he was Italian consul general in 1989. Ettore Sequi expressed hope that the Vienna talks will be successful. He underlined Italy’s willingness to enjoy the economic possibilities of relations with Iran. Sequi said Italian companies have had an active presence in the Iranian market and this can be strengthened in the new era of ties. In the meeting, the two officials discussed ways of expanding economic and trade cooperation between Iran and Italy.

Iranian and Italian diplomats at a meeting in Tehran discussed procedures for the expansion of political and economic cooperation between the two nations and for ensuring regional peace.

The third round of Iran-Italy political discussions were held between Iranian Deputy Foreign Minister Ali Baqeri and Italian Foreign Ministry’s Director General Ettore Sequi in Tehran on Tuesday. Baqeri is Iran’s chief negotiator for the JCPOA negotiations on Iranian sanctions, bringing an automatic question if the timing of Sequi’s visit was also to mediate between Iran and the West.

He also noted that the key endogenous factors in Iran and Europe want continuous and stability of ties but exogenous factors, especially extra-Atlantic ones, constantly encourage rupture and instability of relations.

Therefore, Baqeri added, the strength of these relations is contingent upon making them immune to those exogenous destructive factors.

“This necessitates steady consultations, continued interaction and movement toward lasting cooperation between Iran and Europe,” he stated, according to the Foreign Ministry’s website.

Baqeri further underlined the necessity of joint efforts to fight against terrorism, reiterating that the difference between Iran’s view and that of Europe and their disputes over different regional and international issues are a reality.

He, however, noted that the possibility that they can turn differences in their views and disagreements into a topic to promote mutual understanding and cooperation is a considerable reality, too.

Baqeri then pointed to issues of mutual interest over which Iran and Italy can hold consultations and cooperate with regard to regional issues, calling for practical measures to help establish peace and stability in Afghanistan and Yemen.

The most strategic lesson from the region over the past two decades was the presence and conduct of Western countries and NATO in Afghanistan, the Iranian official said, adding that the issue in itself indicates that global stability and security in the future cannot be achieved through unilateralism and militarism.

For his part, the director general of the Italian foreign ministry described the visit to Tehran as a sign that Rome is interested in expanding cooperation with Iran.

Ettore Sequi noted that ignoring trade and economic cooperation between Iran and Italy does not serve the national interests of the two countries.

He also welcomed the offer to expand the domain of consultations at different levels and over different issues, underlining the need to keep to this path.

Sequi also praised Iran for its humanitarian efforts, including its hosting of Afghan refugees, and expressed hope that joint efforts would continue with the aim of strengthening stability and security in Afghanistan.

Sequi’s visit to the Islamic Republic comes at a time of increased tensions with the west. Italy’s highest ranking diplomat’s visit is to be seen as Prime Minister Mario Draghi’s increased involvement in global geopolitics, as a mediator and peace maker. Recently it was alleged that the Israeli intelligence agency the Mossad, assassinated a high ranking member of the IGRC in Tehran. Meanwhile, italian geopolitics site, Formiche reported that President Joe Biden has made final his decision to keep Iran’s Islamic Revolutionary Guard Corps, the Sepâh, on the terrorist blacklist, further complicating international efforts to restore some normalcy to the 2015 Iranian nuclear deal. Biden is supposed to have briefed Israeli Prime Minister Naftali Bennett on his decision during a phone call on the 24th of April.

Before Biden officially announced the decision, Bennett announced it with a statement that came out simultaneously with the Politico piece. “I congratulate the US administration, led by friend Joe Biden, for its decision to keep the Islamic Revolutionary Guard Corps (IRGC) in its rightful place, which is on the list of foreign terrorist organizations (FTOs),” he said.

Italy sees Iran as a partner to replace its reliance on Russian gas as well as sees itself as a mediator in the various conflicts which threaten European security.