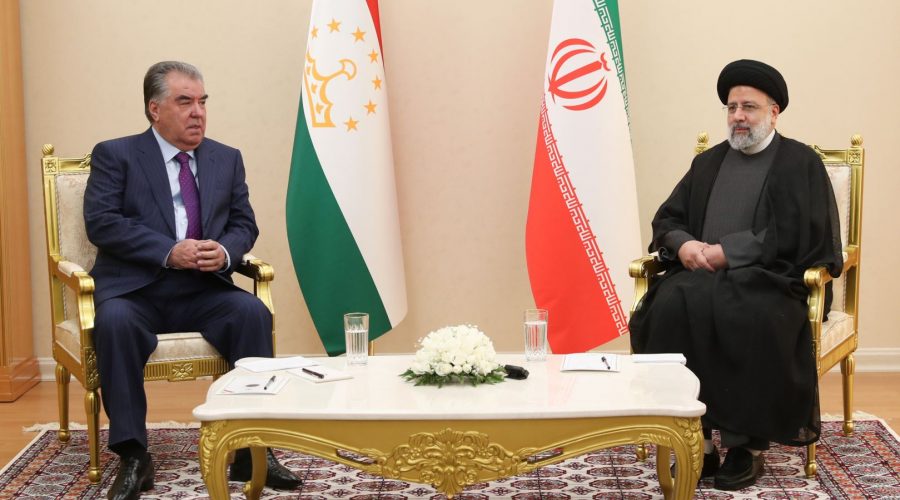 BY CARLO PARISSI. Original in Italian published at Osservatorio Globalizzazione.

Since ancient times, Central Asia has had a long history of relations with that region better known by the term “Persia”, both for reasons of geographical proximity and for the various dominations, which followed one another over the course of history in a more or less vast of the area, by those empires that had the current Iran as their political center (Persian empire, Sassanid empire, etc.).

Among the five states of Central Asia, Tajikistan is undoubtedly the one most linked to Tehran from an ethnic-linguistic point of view, as both are of Iranian culture and the languages ​​of the two countries are mutually intelligible.

A brief history of Iran-Tajikistan relations
Bilateral relations between the two states were established on January 9, 1992 and, in the same month, the Iranian embassy in Dushanbe was opened.

During the years of the civil war in Tajikistan (1992 – 1997), the Islamic Republic did not support any side, despite the threats by Šomdon Yusuf [3] to ask Tehran for help in the event of intervention by the troops of the Commonwealth of Independent States, and argued the need to reach a political solution to end the conflict . On June 27, 1997, in Moscow, the inter-Tajik talks were also attended by Ali Akbar Velayati, the then Iranian Foreign Minister, who signed the General Agreement on the Establishment of Peace and National Agreement in Tajikistan .

From the end of the twentieth century, bilateral relations experienced a constant improvement, also characterized by the expansion of relations in the commercial field, which however suffered a setback and a cooling in the first half of the 1910s, due to two specific events.

The first, dating back to 2013, concerns Bobak Zanjoni, an Iranian billionaire sentenced at home for money laundering through some Tajik and Chinese banks, who allegedly sold two and a half billion US dollars to some partners of the Central Asian state. Asked by Tehran to return the sum, the Dushanbe authorities replied stating that “the Iranian side has not sent any documents on the capital of the billionaire Zanjoni in the banks of Tajikistan”.

In 2016, the most critical point of relations was reached, due to the second event: the participation of Mukhitdin Kabiri, head of the Islamic Renaissance Party of Tajikistan (PRIT), in an Islamic seminar held at the end of 2015 in the capital of the Islamic Republic , during which he met Ayatollah Ali Khamenei. In September of the same year, the Tajik authorities accused the PRIT of preparing a coup d’état, thereby banning the movement’s activities. Following the aforementioned meeting in Tehran, all cooperation programs were partially interrupted .

In 2019 there was a turnaround thanks to the official visit to the Middle Eastern country by the Tajik Foreign Minister, Sirojiddin Mukhriddin, which took place on June 1, during which he met President Hassan Rohani and his counterpart Javad Zarif. Although there were no concrete actions subsequently, this event represented the beginning of the rapprochement between Tajikistan and Iran .

On 17 September 2021, on the occasion of the 21st summit of the Shanghai Cooperation Organization (OCS) held in Dushanbe, President Ebrahim Raisi, at the invitation of Emomali Rakhmon, went to Tajikistan, where he led a high-level delegation, composed of five ministers . The two heads of state met the following day and hoped for the start of a new season of bilateral relations . During the subsequent joint press conference, the two leaders mentioned the situation in neighboring Afghanistan, stating that interference by external actors has caused several problems over the years and that the new executive of the “Tomb of Empires” should be inclusive and represent everyone. political and ethnic groups in the country .

From an economic point of view, in 2021, commercial exchange amounted to more than 31 million US dollars . Raw cotton is the main Tajik exported commodity, followed by kaolin coated paper and chemicals; on the contrary, imports from the Islamic Republic are varied and include primarily plastic items, ceramic and iron or steel objects . As for Iranian investments in Tajikistan, the latter have reached the maximum (77.146 million US dollars) in 2014, while in the three-year period 2016-2018 the minimum point was recorded, determined by the absence of Iranian capital. In addition, Tehran has financed the construction of various Tajik infrastructures of the highest importance, such as the Anzob Tunnel, a tunnel just over five kilometers long that connects the capital to the country’s second city, Khojand, thus avoiding passing through Uzbekistan. The leaders of the two countries have declared that they aspire to reach the milestone of 500 million US dollars in trade over the next few years.

In the military field, cooperation in this field began at the end of 1997, after the signing of a letter of intent – the first of the Central Asian country with a state that is not part of the Commonwealth of Independent States (CIS) – on the basis of which Iran should have trained and trained Dushanbe’s military personnel [18]. More recently, on April 8, 2021, during a summit in the capital of the Islamic Republic, which was attended by the Tajik defense minister, Colonel General Šerali Mirzo, and the commander of the Islamic Revolution Guard Corps, Mohammed Bagheri, the creation of a joint defense commission, the primary purpose of which would be to fight terrorism. In addition to this, a possible export of Iranian arms to Tajikistan was considered.

Another field of significant importance is the energy field, the most important result of which can be identified in the Sangtuda-2 power plant, on the Vakhš river, completed in 2011 and officially inaugurated three years later. Cooperation in this sector is mainly concentrated in the construction of hydroelectric power plants, which in 2019 generated about 40% of the total electricity production. On 2 and 3 December of that year, as part of the thirteenth Iran-Tajik joint commission, the energy ministers discussed the possibility of funding for the construction of a new power plant at the Rogun dam, as well as for the buying and selling of electricity. In June last year, an agreement was reached according to which the networks of the two Asian countries are connected.