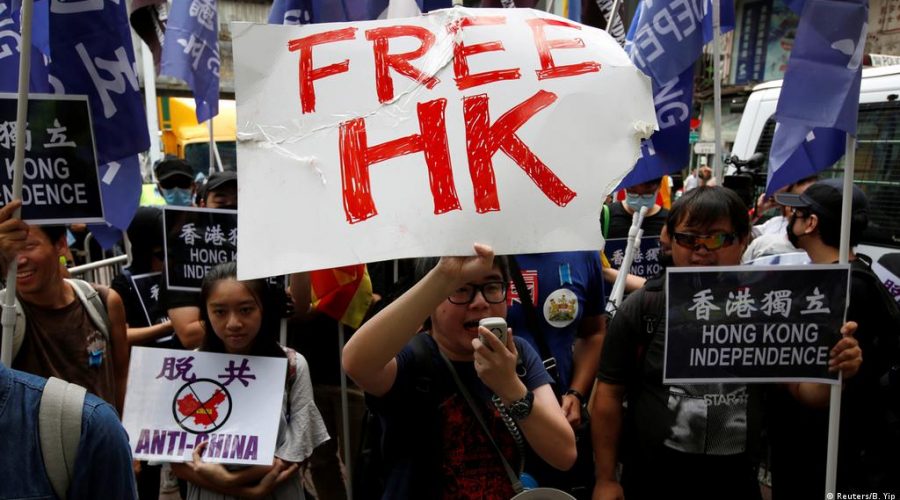 In order to suppress the pro-democracy protests in Hong Kong, Beijing has used the stringent national security law to scare off activists. Hundreds were arrested and many of them were sent to jail. This appeared to have dampened the spirit of freedom of speech and human rights in Hong Kong. However, pro-democracy forces, human rights activists, and even politicians across the world have decided to carry the torch forward.

It was reflected in the worldwide protest marches and vigils that were held in support of the fight of Hong Kongers for democracy and their civil rights recently. This does not spell good news for Beijing as the three-decade-old Tiananmen Square crackdown keeps haunting it on the international platform though it has tried to erase all memories from public consciousness.

Hundreds of people in Canada held protests in June this year against the bloody police crackdown on Hong Kongers. They re-enacted scenes of the 2019 confrontations to raise awareness about Chinese brutalities. Blaming Beijing for retracting the promise of ‘one country, two systems,’

A protester named Tab said “And it went downhill from there … Hong Kong has lost its freedom — freedom of the press, judicial independence, all gone.

“Another protester, Parkie Li said they wanted to let the world know about Hong Kong’s struggle for freedom through the protests. Even some Canadian parliamentarians have extended their support to the movement for Hong Kong’s independence. Vancouver East MP, Jenny Kwan said, she was devastated at the scenes of brutality in Hong Kong. In 2021 Canadian Foreign Minister, Marc Garneau slammed China for targeting pro-democracy activists in Hong Kong.

The Beijing-led crackdown is harmful to local people as well as permanent citizens of foreign origin in Hong Kong. Michael Vidler, is one of the people of British origin, who were living in Hong Kong for three decades. Vidler, who fought cases of pro-democracy activists, had to return to Britain amid possibilities that he would be charged under the “draconian” national security law. Thousands of protesters held a march in London on June 12 to mark the third anniversary of the Hong Kong democracy movement. Even calls were made for Hong Kong’s freedom during the protest rallies on June 4, which were held to mark the 33rd anniversary of the Tiananmen Square crackdown. To China’s dismay, protesters also demanded justice for Tibetans and Uyghur Muslims.

People in Hong Kong were charged with harsh penal cases for keeping a vigil for victims of the Tiananmen Square massacre. Amnesty International’s East Asia Deputy Regional Director, Hana Young said China will not be able to erase history and silence activism. “Just as Hongkongers once stood in solidarity with the victims of Tiananmen, the rest of the world now stands with the people of Hong Kong to deliver the same message: repression will not be tolerated anywhere,” Young said. Many countries have started giving asylum to activists from China.

Such activists are holding protests against the autocratic ways of governance by the Chinese Communist Party (CCP). Professor Feng Chongyi, who fled from Hong Kong, held a protest in Australia to “awake the word” against Chinese autocracy. “We are here to reaffirm our determination to strive for a better future, peace and democracy in China, and show the world we will support the Chinese who are fighting for freedom.” Even a former Chinese diplomat, Chen Yonglin joined the protesters.

There is growing support for the pro-democracy movement from people as well as influential politicians. Expressing support for the pro-democracy supporters in China and Hong Kong, US Secretary of State, Antony Blinken said “The efforts of these brave individuals will not be forgotten. While many are no longer able to speak for up themselves, we and many around the world continue to stand up on their behalf and support their peaceful efforts to promote democracy and the rights of individuals.”

After the strict warning by Beijing over organising the Tiananmen Square massacre anniversary, many Hong Kongers feared that the history would be erased as they lose freedom of assembly and freedom of expression. However, the growing support from different parts of the world indicates that the pro-democracy movements and fight for other suppressed communities would continue to keep the flame alive.