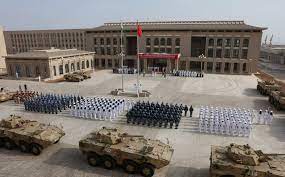 The Chinese model of project financing in developing countries has again come for criticism for creating debt traps with Djibouti Struggling to Repay Chinese Loans. One of the countries at the heart of China’s multibillion-dollar “Belt and Road Initiative”, Djibouti, the tiny nation at the intersection of the Red Sea and the Gulf of Aden is struggling under mounting financing pressure and has suspended debt repayments to China, its main bilateral creditor. Djibouti owed a total of USD 2.68 billion to external creditors as of the end of 2020, according to the World Bank.

In its latest report on Djibouti, the World Bank said the country’s external debt servicing costs tripled in 2022 from USD 54 million last year to USD 184 million and predicted a further increase to USD 266 million next year.

Given the sharp projected increase in its external debt servicing, the International Monetary Fund (IMF) also declared Djibouti’s debt as being unsustainable in late 2021.

Apart from pushing the small country into unsustainable debt, China’s Djibouti investment is also being looked at as an outstanding example of its military expansionism and strategic designs. China has created vast commercial and military interests in Djibouti. Its strategic position – on the Horn of Africa’s Bab-el-Mandeb Strait that controls access to the Red Sea and the Suez Canal has made Djibouti a major destination for Chinese capital, especially in the maritime and free-trade zones.

The developing countries like Djibouti are fascinated towards China in the hope of getting funds to create vital infrastructure. But they slowly drift into the morass of unsustainable debt. According to the Boston University’s Global Development Policy Centre data, Djibouti took USD 1.5 billion from Chinese lenders between 2000 and 2020. This is a hug amount, given the limited avenues of revenue in Djibouti to repay the loans.

The Chinese loans to Djibouti have accumulated over the years. Much of the money was advanced in 2013 – USD 492 million to finance construction of its portion of the Addis Ababa-Djibouti railway, and USD 322 million for the 101km water pipeline from the Ethiopian town of Hadagalla to the Djiboutian interior.

Djibouti borrowed a further USD 344 million in 2016 for construction of the multipurpose Doraleh port. All three of these loans were extended by the Export-Import Bank of China.

In 2017, another USD 150 million was provided by China Merchants Port Holdings Company Ltd, to build the Djibouti free-trade zone.

Chinese companies are also interested in Djibouti for its commercial prospects. Many Chinese companies have invested in the country’s maritime industry and free-trade zones. China Merchants Group has pumped money into turning the Port of Djibouti into an international business district. It has also funded the port’s mega extension – the USD 590 million Doraleh multipurpose port – just west of the capital. China’s first overseas military base opened in 2017 next to the Chinese-operated port of Doraleh. With an eye on the Indian Ocean rim countries, these Chinese companies see lot of potential in Djibouti for doing business.

However, critics point out that China’s model of project funding has little place to develop local industries and create sustained business and employment opportunities. It pays scant attention to help countries become self sufficient even in basic goods such as food by promoting agriculture and other livelihood opportunities to locals based on local resources. Now, as the Russia-Ukraine war has no signs to relent and food and energy prices are soaring Djibouti is struggling to maintain supply of essential goods such as food and fuel at affordable price to its citizens.

Djibouti is a net importer of food and fuel, covering up to 90 % of its food needs through imports. Soaring global oil and food prices have pushed up inflation – the year-on-year rate at the end of June 2022 was 11%. Djibouti continued to be disproportionately affected by the steep rise in global food prices and the war in Ukraine, including disruptions to food supply chains. Rising cost of living is pushing more people into poverty.

The Covid-19 pandemic and Ukraine war have made things further tough for Djibouti. According to experts, Djibouti’s debts were always going to be difficult to pay, “but have become un-payable because of the impacts of the Covid-19 pandemic and other economic shocks on the economy. Nevertheless, the sustainability of Djibouti’s debts was always questionable and since long before the pandemic. But the pandemic further curbed its debt-servicing capacities.

Djibouti’s decision to suspend its bilateral debt payments adds to concerns about the growing number of countries in Africa facing repayment troubles. In 2020, Zambia became the first African country to default on some of its debts. Kenya and Ethiopia are also feeling the squeeze.

It is likely that Djibouti will not be the last African country not being able to service its loans. The acute social and economic repercussions of multiple global crises demand multilateral debt relief from Africa’s main creditors, including China. Beijing’s loans are accelerating the construction of the ports and railways that poorer countries desperately need. But the price could be steep: rising debts, a potential weakening of sovereignty and a possible loss of key assets if they default on their loans. In view of this, China’s model is increasingly coming under scrutiny and suspicion in the African nations.