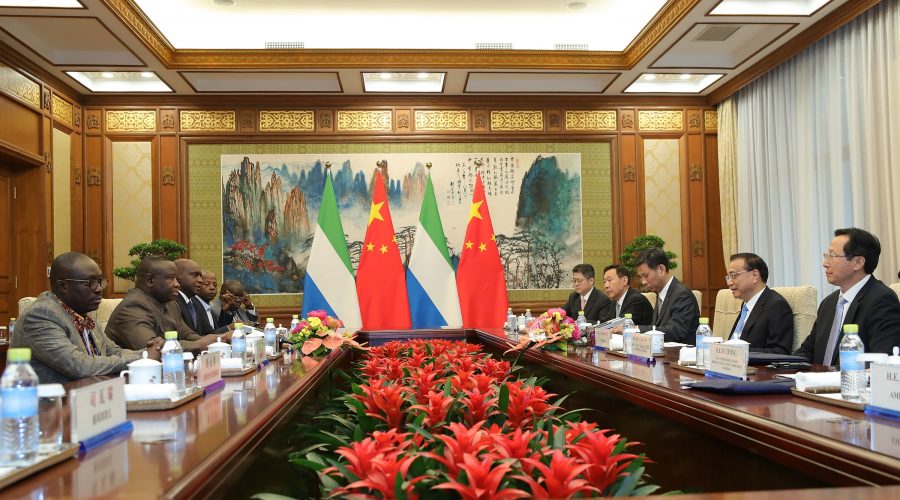 Chinese Overfishing destroys Sierra Leone Fishermen and their livelihood. Sierra Leone, a country in West Africa has one of the richest fisheries in the continent. However, the population of fisheries plummeted due to over exploitation of waters by Chinese fishing fleets. Presently, China accounts for 75% of Sierra Leone’s industrialised fishing fleet.

Fisheries employ 500,000 of this West African nation’s whose population is nearly 8 million people, represent 12% of the economy and are the source of 80 per cent of the population’s protein consumption. Therefore, any issue concerning fisheries is a national issue in Sierra Leone. The Guardian recently published an article interviewing a dozen fishermen in the coastal communities who reported that their catch is dwindling rapidly due to sustained overfishing on a large scale. The coastal communities face devastating consequences of legal and illegal overfishing.

According to one of the advisers to the Sierra Leone’s Ministry of Fisheries and Marine Resources, the Chinese fleet has been taking the profits of the fisheries for the last 30 years causing a considerable adverse impact on the fish stocks between 2009 and 2021. The sea-food resources are, therefore, disappearing fast, local fishermen are suffering and the families in the coastal communities are starving where many families, according to reports, could manage only one meal a day.

Tombo, a coastal city in Sierra Leone, in particular is facing a severe economic crisis. The city’s economy is heavily dependent on the fisheries and the fishermen in Tombo are increasingly, as per media reports, getting into debts and are resorting to violence. People in Tombo are rising up in arms against Chinese fishermen who have usurped and seized their marine resources. On an average, about 13,000 small boats cast off the Sierra Leone’s 506 km coastline.

About 40% of industrial fishing licenses are owned by Chinese vessels, who pay negligible fees for their permits, under-report their catch and overfish Leone waters. The fact that many of these Chinese vessels are far larger and technologically advanced than those of their African counterparts exacerbates the problem further. Importantly, they provide little or no benefit to the local economy, since their catches are sold elsewhere.

Sierra Leone’s troubles have been further compounded by ‘IUU’ – vessels engaging in behaviour that is illegal, unregulated and unreported. Catches are going undeclared, not all boats are fitted with tracking technology and the country lacks the resources to enforce any regulations. All of this is taking away national revenue and preventing local people from developing their own industry. Sierra Leone, which has the potential to earn more than US$ 50 million a year from its fisheries, it ends up with less than US$ 18 million because of illegal fishing and lack of policing. China’s fishing fleets are taking
advantage of weak enforcement in Sierra Leone with devastating effect. A joint operation (2020) by the Sierra Leonean navy and the conservation organization Sea Shepherd Global led to the arrest two Chinese-flagged trawlers found to be fishing without a licence.

In addition to dominating licensed markets, China is consistently ranked as the worst offender for IUU fishing in global index of 152 countries. Across West Africa, illegal trawling is devastating marine ecosystem and undermining local fisheries, which are a critical source of jobs and food security. A study in 2017 found that Sierra Leone, Senegal, Mauritania, The Gambia, Guinea-Bissau and Guinea lost US$ 2.3 billion a year due to IUU fishing, which amounts to 65% of the legal reported catch.
Local people who protest against Chinese trawlers often end up facing violence. According to interviews conducted by Guardian, the trawlers’ crews threw boiling water at a fisherman when he confronted them in areas where trawling is prohibited. Another fisherman pointed out that the Chinese trawlers regularly disturb his property and trash his nets and they fight if he tries to stop them.

In 2019, Sierra Leone impose a month-long ban to allow fish stocks to replenish, which was criticised as too short a time period for replenishment. Various efforts to manage the sector, including the creation of an inshore exclusion zone that prohibits all but subsistence fishing in the six nautical miles closest to shore, installing movement trackers on industrial trawlers have all had a limited impact to promote sustainability due to funding and policing challenges.

Given this scenario, the anti-China sentiments are rising amongst the local populace in Sierra Leone. This also became evident when a US$ 55 million deal to sell 250 acres of pristine beach and rainforest to China caused massive outrage among conservationists, human rights, animal welfare groups and local land-owners in Sierra Leone. The groups criticized the project for destroying the local ecology, polluting the marine environment, plundering fish stocks and the individual ecosystem that are fish breeding grounds and support endangered species.

The African nations are gradually realizing the costs of over-reliance on China and many countries are now cancelling contracts with Chinese companies for their shoddy work. China is increasingly being cornered by many African countries in investment related issues. Tombo remains an important case in point, which shows the extent to which Chinese footprints in Africa can devastate the local ecology and livelihoods.