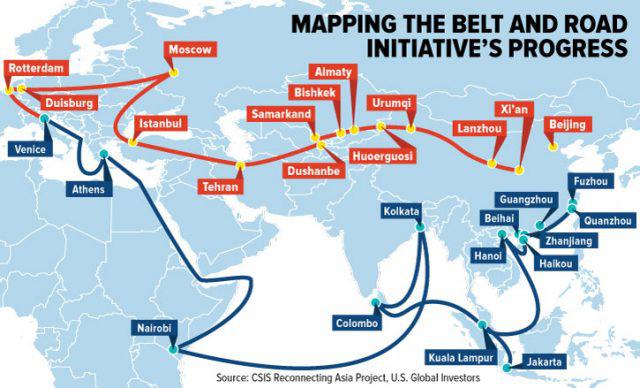 With a number of countries in South Asia and Africa which have been signatories to the Belt and Road Initiative facing foreign exchange crises and unable to repay their external debts, the pet BRI project of China has run into a blind alley.

Pakistan and Sri Lanka are failing to repay their loans; posing a threat to the Chinese economy. The economy of Sri Lanka has collapsed. According to reports Pakistan, too, is on the brink of an economic collapse. Islamabad is depending now on the International Monetary Fund for a bailout package. Bangladesh is finding it difficult to service its external debts. Several African countries have also been unable to complete the BRI projects and are finding it difficult to repay their loans.

According to reports of established think-tanks, countries like Pakistan and Sri Lanka that are faced with an acute shortage of foreign exchange are converting Chinese project lending towards balance of payment lending to tide over immediate economic problems. Studies show a shift in BRI loans to loans aimed at meeting foreign currency shortages.

China has moved significantly away from project lending and towards emergency rescue lending, according to a Bloomberg study. State-owned Chinese banks have lent $22 billion in short-term loans to the central bank of Pakistan since July 2018 while Sri Lanka has received $3.8 billion in short and medium term lending since October 2018.

The emergency lending often carries high interest rates, sometimes 3.5 percent above Libor, the London interbank market interest rates that serve as reference for setting the interest rate in other loans; maturities, too, are much shorter than that typical of infrastructure loans.

The emergency loans are advanced so that the borrowing countries can repay their old project debts with the Chinese banks and also to help these countries weather the storm faced by a liquidity crisis. Thus the Chinese loans go to service old Chinese debts; about 27 percent of the foreign debt of Pakistan is owed to China. The borrowing countries are in no better position with these emergency loans from China, what comes in goes out immediately. For an insolvent country, the situation becomes worse in the long run.

Lending through BRI has slowed sharply since 2017, primarily because a growing number of infrastructure projects are facing difficulties and a domestic campaign against financial risks. In the first six months of 2022 BRI investment and financing was only 40 percent of what it was in the same period in 2019. Sri Lanka received no new BRI loan in 2022.

In the process the BRI balloon of China has burst. This new model of emergency loans has also marked the turning point of BRI. The countries which are seeking funds from China have understood the nefarious Chinese design and are withdrawing from the BRI projects.

In the initial stages, non-viability of projects, internal disturbances and ethnic problems had led to defaults in payment of BRI debts. Since 2020, the Covid – 19 and the Russia – Ukraine war have added to the problem, leading to serious problems for China in recovery of debt.

Unfortunately for China, its design to keep as collateral the projects where it had invested has also failed. The projects have either been shelved or of no commercial value.  Gwadar Port in Pakistan is yet to be completed. For the past two years, the Pakistan government has not paid their dues for the power projects; agreements are being violated since 2018. The international airport at Zambia, Hambantota Port in Sri Lanka and Colombo Port City are not viable and of no commercial value.

In late August, 2022, Beijing once again parried the request from Colombo for the restructuring of its debt to China, saying “the ball is in Sri Lanka’s court.” It is estimated that in 2022-23 Sri Lanka owes China about $2 billion by way of debt repayment.

Still reeling under its economic crisis, the island nation has made several requests for restructuring of debt to give it breathing space but has each time been cold-shouldered.  For Sri Lanka, it is vital to arrive at a debt restructuring arrangement with China to obtain a bailout from the IMF. But, Beijing has asked Colombo to discuss the issue with Chinese banks instead.

With depleting foreign currency reserves and rising inflation, Pakistan is on the brink of economic collapse and poised to go the Sri Lanka way. With the pressure of debt servicing, the situation is unlikely to change, according to the State Bank of Pakistan, the central bank of the country.

The only hope of Pakistan to avoid bankruptcy is to secure a deal with the IMF for a $6 billion assistance package. It is reported that the IMF wants to ban Pakistan from borrowing more from China for the projects under China Pakistan Economic Corridor before extending the assistance.  IMF has raised objections to Pakistan’s loans from China and in particular the arbitrarily high payments made to Chinese Independent Power Producers, suggesting Pakistan renegotiate its energy agreements with Beijing. Sovereign counter-guarantees to Chinese IPPs eat up the government revenue of Pakistan even as Pakistan continues to face power outages. For, project implementation under the CPEC is erratic.

The power giants of China organized under the IPPs have threatened, on the other hand, to shut down their power plants unless payments are made upfront, alleging payments have not been made for already used power, according to a news agency report from Islamabad. This has added fuel to the anti-China sentiment which is already quite high in Pakistan because of the Chinese strategy of land-grabbing and providing employment to its own people at the cost of the local population.

To the chagrin of Beijing, the latest criticism of BRI projects has come from the Finance Minister of Bangladesh Mustafa Kamal. On August 12, he said in an interview to Financial Times that Beijing could not disagree with criticisms related to the BRI projects. “Whatever the situation is going on worldwide, everybody will be thinking twice to agree to BRI projects,” he said. “Everybody is blaming China. China cannot disagree. It is their responsibility.” He said China had not been rigorous enough to support projects which were viable. China should have undertaken a thorough study of the projects involved before lending. “After Sri Lanka, we felt that Chinese authorities are not taking care of this particular aspect, which is very important.”

After Sri Lanka and Pakistan, Bangladesh, which has received billions of dollars of finance from China for BRI projects, has sought the support of the IMF to avoid a financial crisis. The global rating agency Standard & Poor meanwhile has cautioned Bangladesh that further depreciation of its currency would mount domestic inflationary pressure and make external debt servicing costs more expensive. Between June and August 2022, the Bangladeshi Taka has depreciated by about 10 percent against the U.S. dollar.

Faced with serious debt problems, African countries, too, are renegotiating terms with Chinese agencies, deferring payment of interests and suspending non-viable projects, according to reports. The total loan of China to countries in the African continent is estimated to exceed $140 billion. Among the major recipient countries of Chinese loans are Angola, Ethiopia, Kenya, Republic of Congo, Zambia and Cameroon. The large volume of debts and the terms of repayment are triggering a crisis of repayment. According to an IMF study of March 2021, of Kenya’s bilateral external debt, nearly 63 percent is loans from China to finance the construction of the standard gauge railway project. Overall, Chinese loans account for more than one-fourth of the total external loans of African countries with high debt distress, according to an Observer Research Foundation study.

In 2015, there was widespread discontent in Angola that Angola is left with little crude oil to export because of repayments in oil against loans from China.  According to a Reuters report in March 2016, Angola found itself with a dwindling amount of crude to sell as more of its oil flowed to China for debt repayment, leaving little from the oil revenue to finance its health care sector. Angola is one of Africa’s largest oil exporting nations. China has refused to waive the debts of African countries, except in some selective cases.