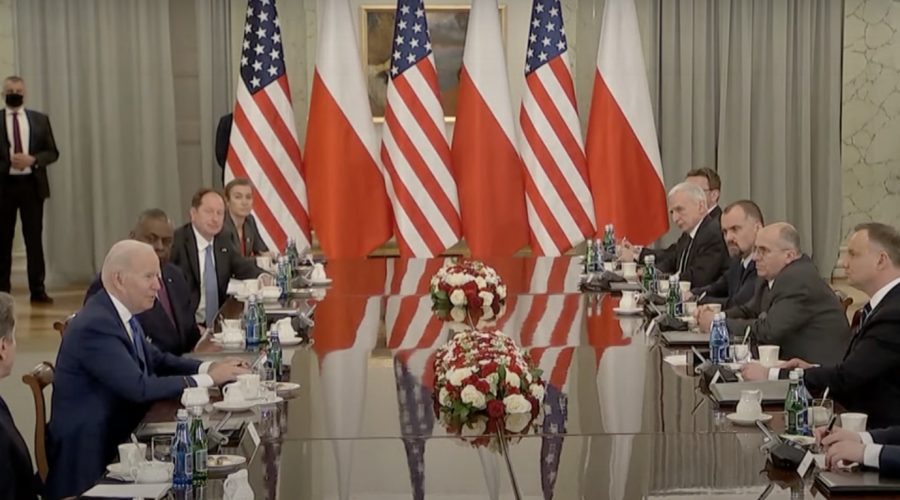 Biden lashes out at Putin in Poland, almost calling for a regime change in Moscow while Russian bombs rained down on Lyiv, 60 kms from the Polish border.

Joe Biden’s call-to-arms speech in Poland was long on soaring rhetoric about the virtues of democracy but woefully short on what more the West will do to help Ukraine defeat the Russian invasion. But by the time he got to the finish, most of that was forgotten, reported the NY Post.

President Biden began his third day of diplomacy in Europe with a surprise meeting Saturday morning with Ukrainian officials who traveled to Warsaw from their war-torn nation to plead for more help from the West.

He came, he saw, he blundered.

Biden’s comments on Saturday, including a statement earlier in the day calling Putin a “butcher,” were a sharp escalation of the U.S. approach to Moscow over its invasion of Ukraine.

“For God’s sake, this man cannot remain in power,” Biden told a crowd in Warsaw after condemning Putin’s month-long war in Ukraine.

A White House official said Biden’s remarks did not represent a shift in Washington’s policy, walking back the President’s words.

“The President’s point was that Putin cannot be allowed to exercise power over his neighbours or the region,” the official said. “He was not discussing Putin’s power in Russia, or regime change.”

Asked about Biden’s comment, Kremlin spokesman Dmitry Peskov told Reuters: “That’s not for Biden to decide. The president of Russia is elected by Russians.”

Calling the fight against Putin a “new battle for freedom,” Biden said Putin’s desire for “absolute power” was a strategic failure for Russia and a direct challenge to a European peace that has largely prevailed since World War Two.

“The West is now stronger, more united than it has ever been,” Biden said. “This battle will not be won in days or months, either. We need to steel ourselves for the long fight ahead.”

As Biden lashed out at Putin, the general sentiment from Ukrainians in Poland was “lots of talk, little action”. Biden met with Ukrainian defence and foreign ministers during his visit to Poland. Over 3.8 million people have been displaced from Ukraine since Russia’s unprovoked aggression. The US refuses to engage militarily or allow NATO to engage in the defence of Russia as it is fearful of a third world war which will definitely see the use of nuclear weapons. Biden visited Poland after a visit to Brussels for an emergency NATO summit and to attend the council of Europe meeting.