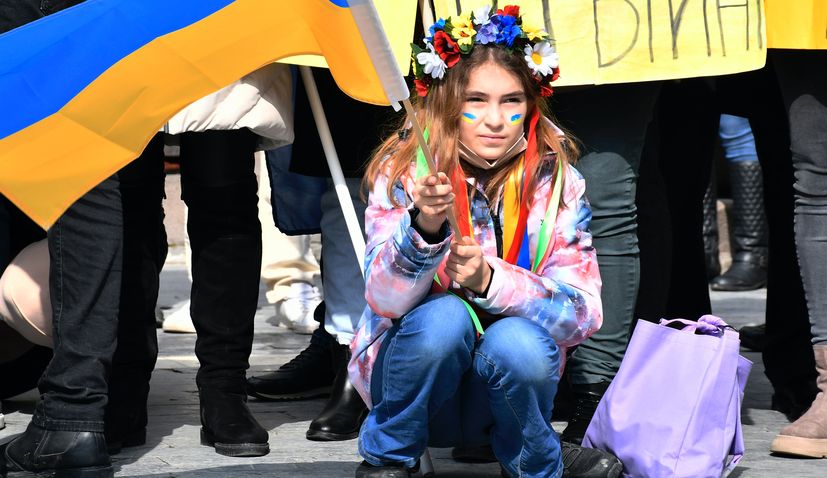 3 million Ukrainian refugees under increased risk of human trafficking.Men 18-60 in Ukraine have had to stay behind and fight. So women and children have had to flee into Europe alone.

While European solidarity specially in the bordering countries of Poland and Romania, have been showcased by the European Union, the ugly face of human trafficking is another reality on the rise.

Infact organized criminal gangs have trafficked women and children from Ukraine over the past decades. The infrastructure exists and now the access to the victims has become easier and increases exponentially. Given the refugee exodus, the checks and balances that European police forces had established have now been rendered useless.

The fact that majority of the refugees are women and children their flight from Ukraine becomes distinct from other mass refugee movements this century, prompting heightened concerns, from Poland’s eastern border to Germany’s capital, about human trafficking. European authorities and aid organizations are warning that criminals may seek to capitalize on the desperation of refugees, with more than 3 million leaving Ukraine since Feb. 24, according to U.N. estimates.

“What we’re already beginning to pick up on the border across Poland, Romania, and other countries that surround Ukraine is stories, evidence of people traffickers operating and people disappearing,” the CEO of Unseen UK, Andrew Wallis, told EURACTIV.

He explained that the current war is taking us back 20 years to when Ukraine was a major source for human trafficking.

The International Organization for Migration on Wednesday said those concerns were based in reality, pointing to initial reports of traffickers exploiting the large-scale human displacement, including instances of sexual violence. The U.N. agency did not quantify the problem, noting that many cases go unidentified in the immediate aftermath of a displacement event.

The International Organization for Migration (IOM) is worried about the risk of trafficking in persons as well as sexual exploitation and abuse in Ukraine and the region as the number of vulnerable people fleeing the war continues to rise.

Over three million people have fled Ukraine, including 162,000 third country nationals (TCNs). The deteriorating humanitarian situation and resulting large scale and complex movements correlate with an increase in threat to personal safety, putting people on the move at heightened risk of exploitation. While cases of human trafficking are less likely to be identified in the immediate aftermath of mass displacement, initial reports from within and outside of Ukraine indicate the potential for traffickers to exploit the vulnerabilities of those fleeing the war.

Instances of sexual violence have already been reported and among the individuals promising onward transportation or services, there have been indications of potential exploitation.

“IOM reports show that people fleeing Ukraine are predominately from single-headed households including women, children and older persons – some of whom are unaccompanied and separated –and third country nationals,” says IOM Director General António Vitorino.

Adding to concerns among some experts and aid workers are the cash incentives unveiled by governments, which were caught flat-footed by the Russian invasion and have depended on an outpouring of support from civil society. The Polish government is offering 40 zlotys a day, or just under $10, to residents who make space in their homes, while Britain is promising 350 pounds, or about $450, a month, while vowing “light touch” checks to guard against ill-intentioned hosts.

The issue of background checks has emerged as an early flash point of volunteer efforts, as governments and civil society weigh speed against safety. Another shield against possible exploitation is the existing Ukrainian diaspora across Europe, providing some refugees with networks of family and friends.

“It’s a complicated balance,” said Inga Thiemann, an expert on migration and human trafficking at the University of Exeter in England. “There is a risk associated with not doing checks on hosts — or not doing checks immediately — but leaving people to their own devices carries risks as well.”

“We have a lot of people who want to help,” Karolina Wierzbińska, a coordinator from Homo Faber, an NGO helping at Polish train stations, said of the droves of people who have driven to the border and reception centers with cardboard signs offering rooms in their apartments. “But we also have people who want to use these women.”

“Very important: if two men approach saying they have a place for young women with children to stay, especially if outside of Berlin, please go to coordinator and report this,” read one message in an arrival group in the southern part of Berlin. A message recently was sent highlighting extra precautions for unaccompanied minors. “Till further notice: NO unattended minor must leave the station privately in ANY way (NO private transport, NO private accommodation),” it read.

“The issue that we face with trafficking and criminal networks are they are used to operating in the shadows,” said Joe English, a UNICEF spokesperson, who has been spending time on both sides of the Poland-Ukraine border this week. “They do this in times of peace, and, especially, it is ripe for exploitation during times of crisis and chaos.”

There is no respite for the Ukrainians caught in Putin’s war and Europe has been caught unawares.